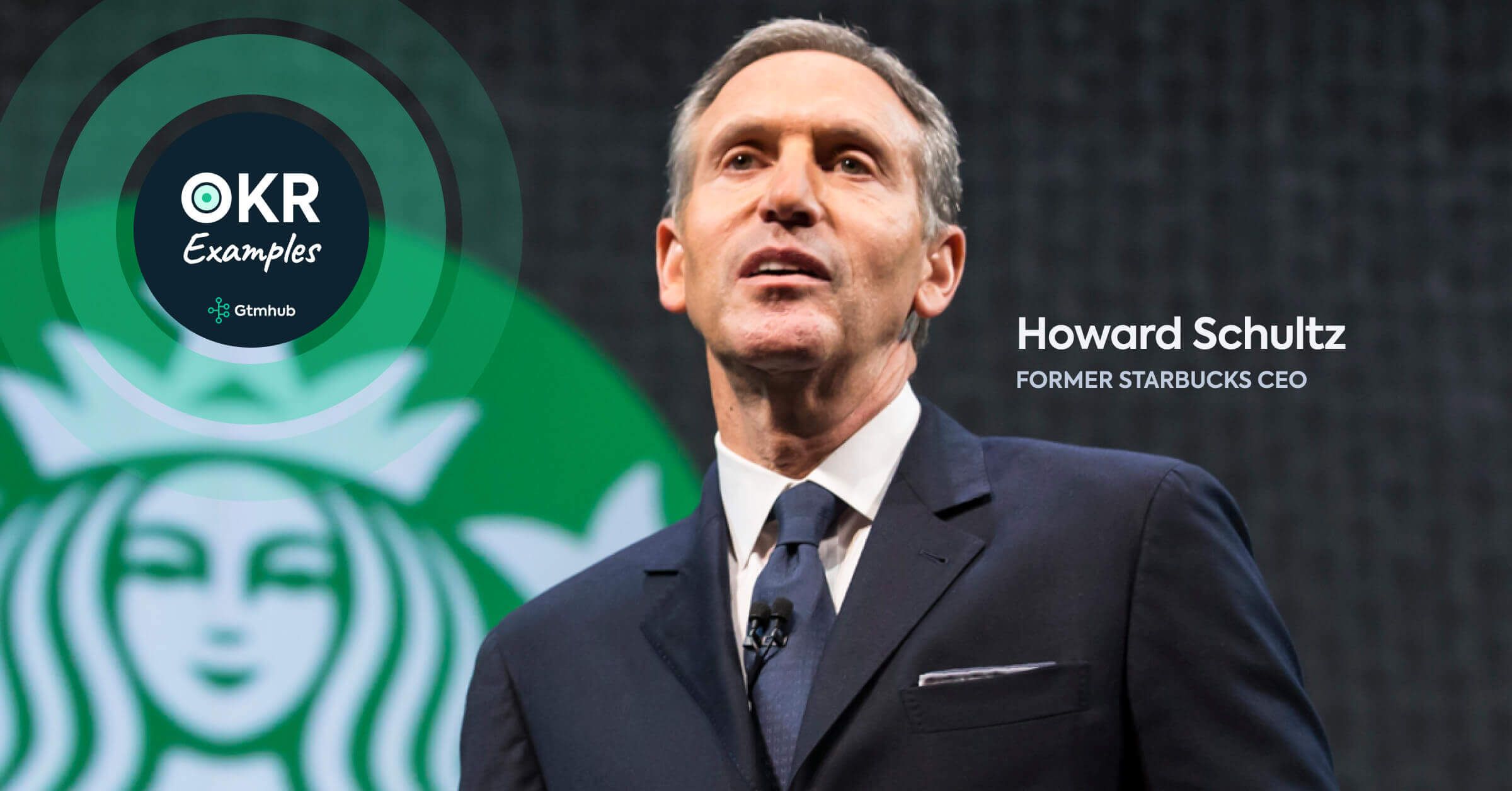 Welcome to the OKR example series inspired by true stories from the business world. In search of an OKR example for a CEO? Here's one inspired by former Starbucks CEO Howard Schultz.

The Starbucks mission is to "inspire and nurture the human spirit, one person, one cup, one neighborhood at a time."

CEO Howard Schultz's vision for bringing about the Starbucks mission was to build store experiences that were capable of more than just creating value. Schultz wanted to create store experiences that were capable of "enhancing the lives of many people who perhaps would not have anywhere to go if Starbucks did not exist." Schultz completed his vision by committing Starbucks to local community services projects wherever the stores were based.

By the time Schultz stepped down from the CEO position in 2000, the mission had helped make Starbucks a global powerhouse with over 28,000 stores in 77 countries. But eight years later, after thirty-seven years of continuous growth, Starbucks' share price had declined by fifty percent.

For Schultz, the company's problems ran deeper than a competitive landscape and weak economy. "We were measuring and rewarding the wrong things," he said. Schultz added, "one of them was transaction speed. We're not in the transaction speed business. We're in the business of enhancing people's day,"

Schultz was also troubled by how "our growth and our relationship with our stock price in Wall Street had somehow become integrated into the core purpose of the company."

In 2009, the Starbucks board returned Schultz to the position of CEO and assigned him the goal of restoring Starbucks' fortunes. Since Schultz believed the decline stemmed from the organization losing sight of its mission, his first-year Objective was to realign the whole organization with the core mission.

With this in mind, the first Key Result Schultz wanted to achieve was developing "a transformation agenda" for restoring mission alignment that was so simple and clear that everyone in the organization could understand it.

The second Key Result for Schultz was getting the whole organization on board with the transformation agenda.

Schultz's 12-month Objective: Get back to the core mission — enhancing people's day

KR1: Conduct a grassroots retraining for the whole organization

Schultz was so uncompromising about achieving KR1, his entire transformational agenda "fit into one page."

He also made sure the language was so clear that everyone could understand their role in the plan regardless of whether they were "a twenty-hour a week part-time Barista or a president of a division."

Schultz was equally uncompromising about achieving his second Key Result. In fact, Schultz was so uncompromising that he provoked controversy and headlines. Even Schultz admitted that his approach had fellow executives wanting to "hang me from the roof."

What did Schultz do to invite such a reaction? He shut down every Starbucks in North America to retrain over one-hundred thousand staff.

The three years following Schultz's return, the Starbucks share price climbed from $7/share in October 2009 to $36/share in March 2011. History (and data) suggests Schultz was correct in claiming the real problem was that the organization had forgotten "Starbucks has never been in the coffee business serving people. Starbucks is in the people business serving coffee."Schultz's laser focus on the Objective of realigning the organization with its core mission was precisely the double shot of espresso the company needed.