Most organizations will fail with OKRs on their first attempt.

The actual reasons differ, but quite often it’s the gap between expectations and reality. In this post, I am going to list the top 5 myths which set unreasonable expectations when it comes to Objectives & Key Results methodology.

As Jeff Gothelf eloquently put it: simple does not mean easy . It takes about 10 minutes to understand OKRs as a framework and many people will extrapolate that implementing them will be just as easy. That, however, is almost never the case and people become frustrated.

Simple, but not easy

Getting in shape is pretty simple – eat healthy and work out. And at the same time, the business model of fitness gyms is based on the notion that 90% of members will show up only once.

2. OKRs will bring alignment and focus

The second myth is that adopting OKRs will automagically bring alignment and focus. This is not going to happen.  OKRs are simply a framework to help you get there.

What OKRs do is force you to face the real reasons behind lack of alignment and focus.

If there is misalignment, there is a reason for it. Often, it’ll be the empire building, information trading, internal competition, budget wars and so on.

Same for the lack of focus. It could be overzealousness, lack of discipline or culture of no accountability.

OKRs will not solve any of these problems on their own – they will just put a very big spotlight on these dark places of your organization.

You won’t be able to make OKRs success until you successfully handle the underlying issues.

Often organizations think that they are completely unique. It’s a good way to attract talent, but it’s a horrible way to adopt a methodology. Many organizations will break rules of OKRs, under the excuse of uniqueness, when OKRs push them too far away from their comfort zone.

The illusion of uniqueness

A classic example is – we are different, so we need to have 12 top-level objectives (best practice is 3). The point of limiting the number of objectives is, of course, to drive focus. Giving yourself an easy way out – is just that – an easy way out.

4. People want to use OKRs

This is a myth, I myself, believed for a long time. The idea here is that people want to use OKRs, but either don’t know how or it is too cumbersome.

The thing is – people don’t. It’s just another thing they have to do; another process to follow.

Setting goals, tracking progress, seeing yourself failing is not fun. At Gtmhub, we try to make it not cumbersome , but at the end of the day – it’s work. I follow my OKRs religiously and prioritize all my work around them, but given a choice – I’d prefer to be on a beach drinking margaritas.

Selling OKRs as something fun is a sure way to disillusion a lot of people.

OKRs have been used early on in Intel’s history (founded in 1968, by Andy Grove). When John Doerr joined Intel in 1974, Intel was already using OKRs. So, we are talking almost 50 years here. That’s how cutting edge OKRs are.

Long, long time ago. On the Moon.

Moreover, OKRs are really a take on the MBO (Management by Objectives) framework – developed by Peter Drucker in 1954. Sixty. Four. Years. Ago.

Hurry up. Jump on the hype train. 😉 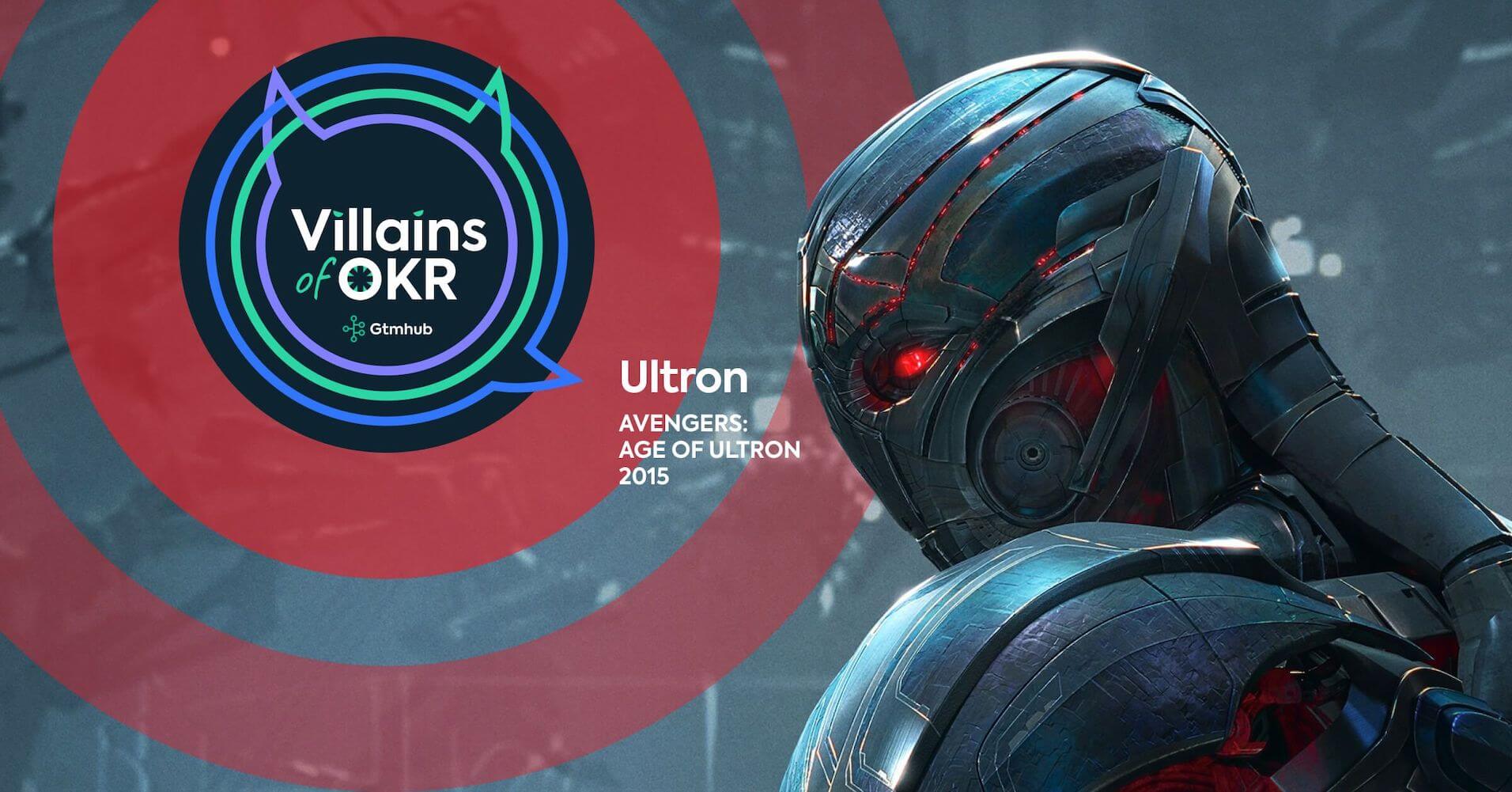 Ultron and his OKR

Ultron achieved only 42% Objective progress. He failed to execute his strategy. Let’s review why through an OKRs lens.