Lions and Tigers and OKRs, Oh My!: The Wicked Witch of the West and her OKR 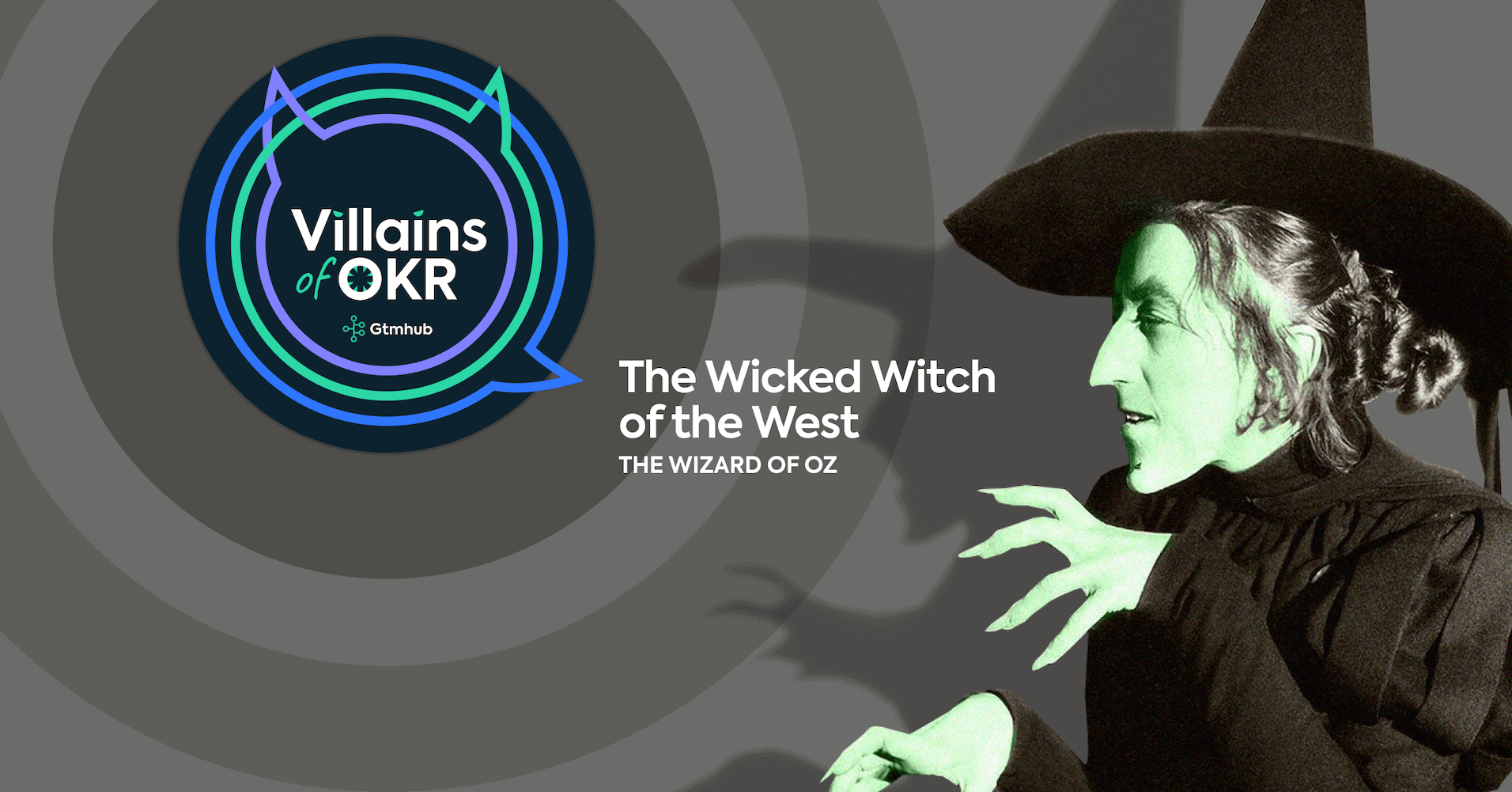 What do iconic fictional villains have in common? They always lose in the end. In our Villains of OKR series , we will analyze the mistakes in their strategy execution and learn from their failures through an OKRs lens. For this OKR analysis, we venture somewhere over the rainbow to explore the rise and fall of The Wicked Witch of the West from Wizard of Oz.

“Curses, curses! Somebody always helps that girl. Shoes or no shoes. I’m still great enough to conquer her. And woe to those who try to stop me!” — The Wicked Witch of the West

The Wicked Witch of the West achieved 22% progress on her OKR. She was unable to achieve her objective.

She did this so the slippers wouldn’t fall into the hands of the Wicked Witch of the West.

1. She stayed focused, at first

Glinda was the most powerful of the witches. The Wicked Witch of the West could not beat her. She passed the powerful ruby red slippers to Dorothy to keep them from the Wicked Witch and saved Dorothy and her friends from the hypnotizing poppy patch.

The Wicked Witch of the West’s goal was to obtain the ruby slippers instead of overcoming Glinda. She didn’t try to go head-to-head with Glinda. Rather, she remained focused on Dorothy’s whereabouts.

In business, we can’t control everything. We have to account for less-than-ideal circumstances, and more importantly, factors that impede progress. The key is to remain focused on what matters and work diligently towards the goal. And leaders need strengths to triple-focus : self (inner), people (other), and system (outer) awareness to manage for success.

2. She led with ego over effectiveness

She could throw fireballs ☄️. And had unknown bounds of creative magic. Yet, she only used this power to frighten Dorothy and her companions. She could have (literally) lit up Dorothy and her entourage, yet focused only on enhancing her ego rather than her execution.

This is dangerous. As Jacqueline Carter, a partner and the North American Director of Potential Project, wrote , “A big ego makes us have a strong confirmation bias. Because of this, we lose perspective and end up in a leadership bubble where we only see and hear what we want to. As a result, we lose touch with the people we lead, the culture we are a part of, and ultimately our clients and stakeholders.”

Finally, when the Wicked Witch captured Dorothy, she couldn’t complete the KR of eliminating Dorothy. She allowed a loose end, Toto the dog, to escape and run to get help. Soon after, the Scarecrow, Tin Man, and Cowardly Lion attempted a rescue. Starting the story with strong execution, she was minutes away from completing her goal but failed to complete her KR because of overconfidence.

At the very end, instead of getting Dorothy’s shoes, she opted to destroy Dorothy’s friends first. The Wicked Witch could have easily taken the shoes given Dorothy and her friends were trapped and outnumbered. She lost sight of what really mattered. And that small misstep cost her. Of note, “focus” is not enough. There are activities we must engage in to ensure our behaviors align with our intent.

It is not enough to take steps, which may someday lead to a goal; each step must be itself a goal and a step likewise.

The Wicked Witch of the West learned that she had serial temporary advantage in her world, much like in ours. Her strategy needed a strategy . To win, she needed to iterate on and diligently execute new approaches more rapidly than her enemy. Without this momentary disregard for her stated objective, we can conclude that she likely would have obtained those precious ruby slippers to become the most powerful witch in Oz.

Ask these 3 questions to succeed with OKRs.

Bottom Line: To be successful with OKRs, ask three questions:  What do we want to achieve? How are we going to measure success? What are we going to do to make progress?

Efficiency is for robots

Ferrari 812 Superfast gets 13 miles per gallon (about 18l/100km). Macallan 18 is a single malt whiskey aged for 18 years in sherry-seasoned casks sourced from Spain. 50&50 is a blend of Capannelle Sangiovese with Tuscan Merlot – aged about 24 months in barrique and best consumed 20 to 28 years after the bottling. Wagyu

First in our series of blog posts dealing with common pitfalls of implementing OKRs in an organization is the one of setting too many objectives. It is advised that no person or team has more than 3 objectives per OKR period (usually quarter). In practice, however – when just starting out – people tend to write