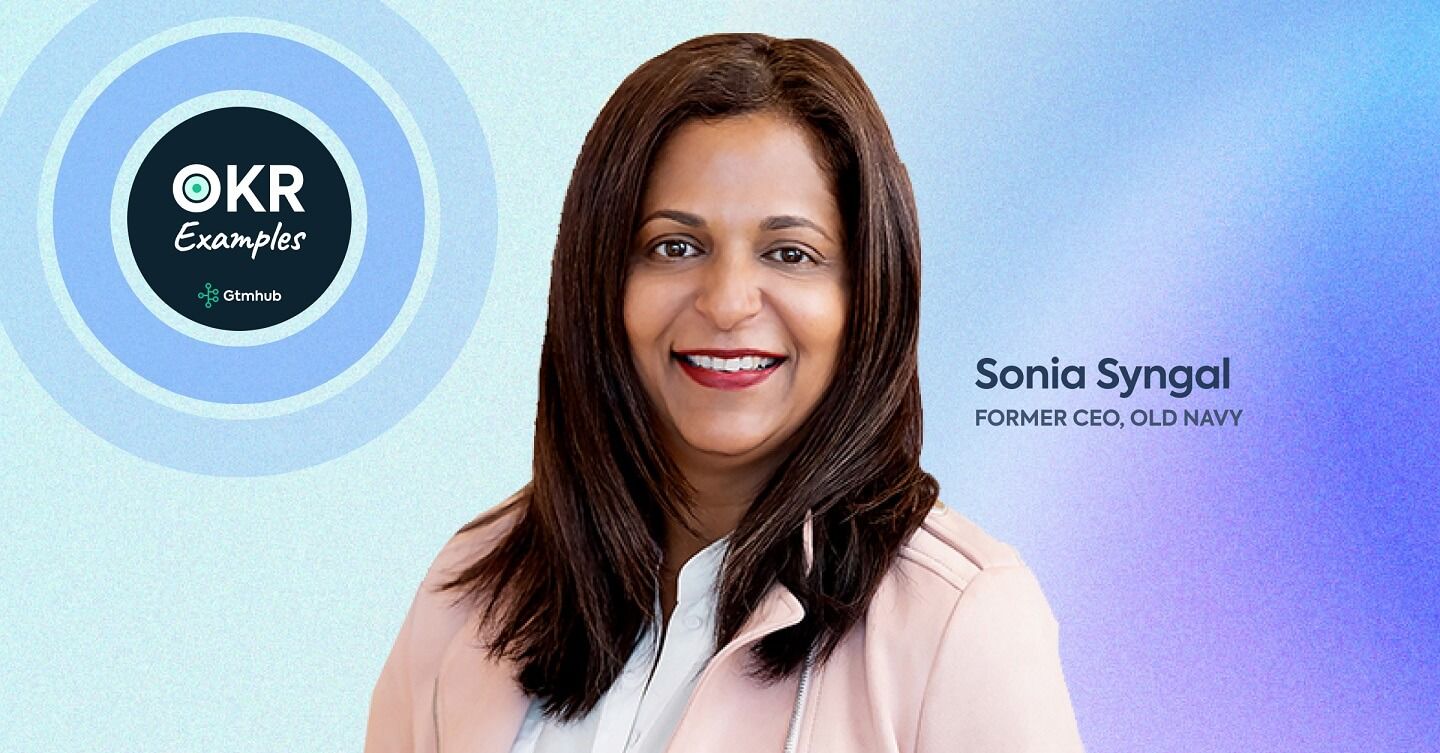 Welcome to the OKR example series inspired by true stories from the business world. In search of an OKR example for a CEO? Here’s one inspired by former Old Navy CEO Sonia Syngal.

Since Don and Doris Fisher founded Gap in 1968, the mission had always been to make as many people as possible feel good about how they looked through affordable fashion. This commitment helped make Gap a global brand, with stores branching as far from the business' San Francisco roots as Delhi and Beijing. However, by the time the board made Sonia Syngal CEO of Old Navy in 2016, the parent company was suffering from sliding sales and a reliance on discounting — a strategy that would eventually cost the Gap CEO Art Peck his job.

The Gap board gave Syngal the task of bolstering the group's fortunes by taking the revenue of Old Navy to new levels. At the time few realized how just how uncompromisingly customer-centric her approach would be: instead of listening to analysts or fellow executives, Syngal reasoned that "obsessing about our customers and what our customers are telling us" was the key to success.

The outcome was some unorthodox growth strategies leading to raised eyebrows among the retail analyst community. For example, under Syngal, Old Navy would become a brick-and-mortar apparel retailer that placed an equal focus on e-commerce, a far-from-obvious decision back in 2016.

Old Navy would also end the practice of treating plus-sized clothing as a distinct category with separate pricing. Plus-size would become just another size, with no difference in price to garments in conventional sizes, in effect abolishing the idea of the plus-size category.

The most eyebrow-raising decision was to open over a thousand new stores in an economy that had other brick-and-mortar operations downsizing. Even more controversial, Old Navy would abandon shopping malls and instead opt for stores in low-rent premises situated locally to customers.

"Morgan Stanley, for one, said it was unclear on the rationale and worried about the many execution risks involved," noted Fashion Reporter Marc Bain.

Despite the critics, Syngal remained quietly confident that the strategy, combined with an apparel range that included kids' clothing, would get "moms to come in and shop repeatedly as their kids grow. Those moms can also shop for themselves and everyone else in their families while they're there."

Perhaps Syngal's confidence also stemmed from understanding the strategy of being more inclusive and accessible aligned with the group’s core mission, i.e. democratizing fashion, which had laid the foundation for the era of growth.

In order to grow revenue, we will

KR2: increase sales of plus-size clothing from x to y

KR3: go to where the customers are by opening x new stores in local areas.

History records that Syngal led Old Navy from $7B to $8B in just three years. She expanded Old Navy’s North American presence to more than 1,200 stores in the US, Canada, and Mexico, and scaled its e-commerce site to the #4 largest apparel site in the U.S.

The final vindication of Syngal's unorthodox strategy came on March 23, 2020, when the parent company board promoted her to the position of CEO of Gap Inc.

OKR examples inspired by true stories from the business world. In search of an OKR example for a CEO? Here's one inspired by the former Starbucks CEO Howard Schultz.