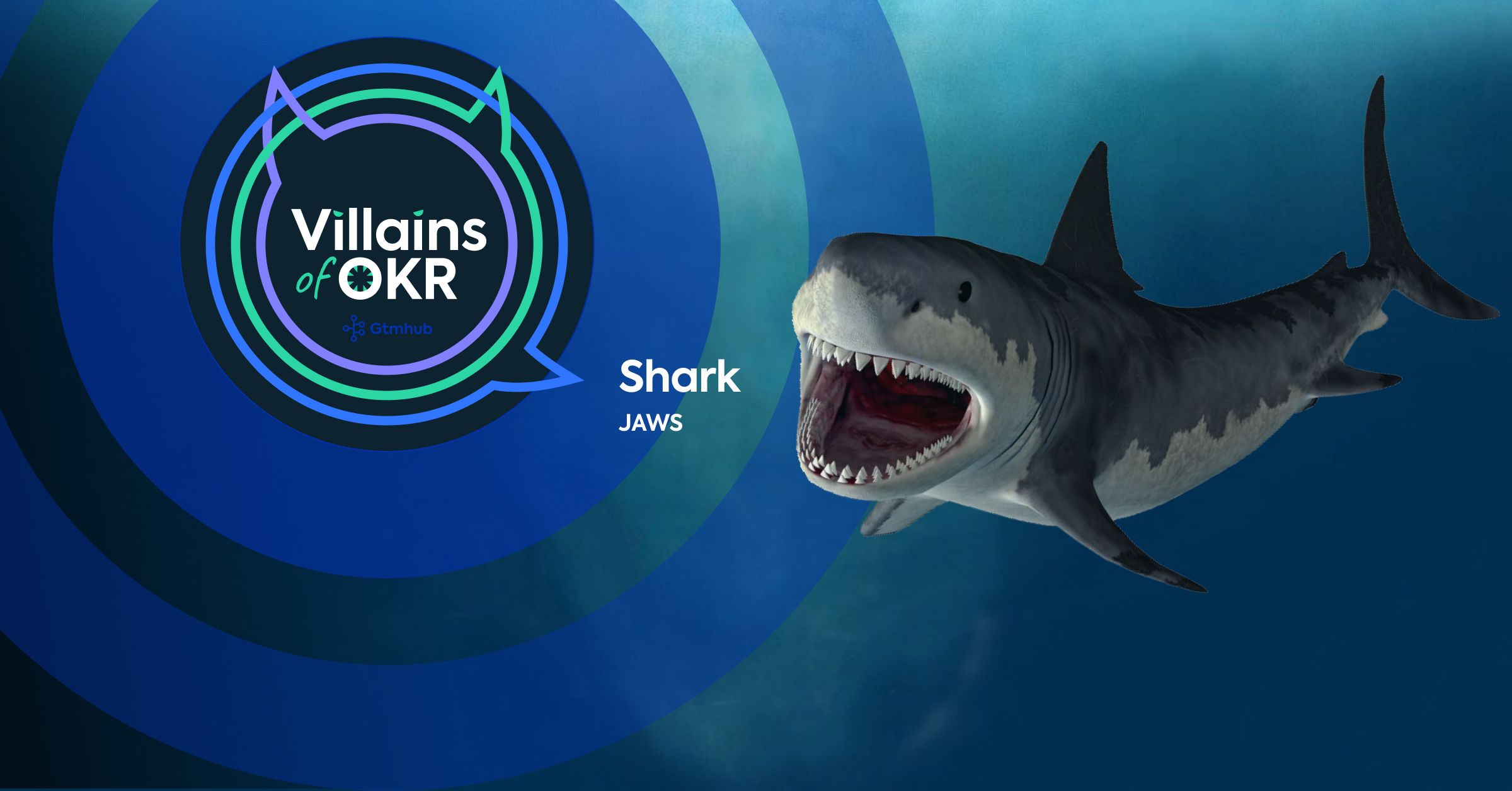 What do iconic fictional villains have in common? They always lose in the end. In our Villains of OKR series we will analyze the mistakes in their strategy execution and learn from their failures through an OKRs lens. Welcome to our summertime “Beat the Heat” series!

Credentials: Mammoth Great White. The nightmare of any beachgoer.

Eat every living thing in the way (fish, human, or otherwise)

In terms of execution, Jaws is as one-dimensional and noncomplex as can be. While he may be intelligent and enhanced, the Jaws film doesn’t break into the science fiction realm with his capabilities. He’s still a shark. Yet, we can analyze Jaw’s instinct and apply a few lessons to the world of OKRs and business.

He was careful initially, but lost caution when it mattered most

Jaws dialed in on execution. At least, as much as a shark can be dialed in above animal instinct. He focused on what mattered initially: not getting caught. His carefulness set him up to achieve his overall Objective of terrorizing Amity Island to the fullest.

Then Jaws got careless. His animal instinct took over and he became overconfident in himself – his first true vulnerability. Or as we say at Gtmhub, be confident; never arrogant. Ego blinds us to reality, and Jaws paid the ultimate price for being unaware of his own.

In business, caution is the counterbalance to risk. The narrative of modern business rewards risk-takers, but scaling and improving a business takes small and careful foundational moves too.

OKRs provide a means to take calculated risks. The framework, by design, encourages risk-taking. The caution comes as we are able to transparently see what others are defining as goals to counterbalance what might be a danger to the organization altogether.

Caution isn’t something that’s bragged about, but when balanced with risk-taking, it’s a critical part of the success equation. You lose it, and like Jaws, you might lose yourself.

He set a stretch goal… then overstretched

Terrorizing an island is a simple, yet massive goal. Jaws’s OKR required him to sufficiently mitigate risk until he could make a big splash to reach his Objective. He started this by avoiding capture up to the holiday weekend. A successful KR1. Jaws then maximized the shock of his next murder spree by doing it while the beaches were crowded for the holiday. Great timing and patience.

Then, Jaws overstretched with Key Result 3. He should’ve stayed away from the boat.

Conceptually, avoiding getting caught would mean not antagonizing the only three characters capable of catching him — Quint, Brody, and Hooper. Jaws decided to really stretch by attacking their boat. Jaws’s climax of success happened when he devoured Quint. Then he overstretched by continuing his pursuit, making himself vulnerable to Brody’s scuba tank/rifle attack.

With your OKRs, you must answer “Why?’ for all of your Key Results. They have to make sense for your overall Objective, and most importantly, not endanger the progress of one another. Risk, as per the last analysis, is an important component of any well-built OKR. But it must be checked.

OKRs do both — allow risk and mitigate it. Key Results act as checks and balances for each other, a modern-day application within Goodhart’s Law . Key Results with varied focuses allow us to tackle Objectives from a well-rounded point of view — this is why we recommend a minimum of two Key Results. Jaws’s KR3 was too risky, and he didn’t have the capacity to check that risk (because he’s a shark).

He didn’t need to destroy the Quint-Brody-Hooper trio. While destruction and murder were a large contributor to his other Key Results, Jaws needed restraint with KR3 to complete his Objective.

Jaws lost focus on what mattered. Terrorizing without getting caught.

But, he illustrated the importance of timing

Whether it was intentional or lucky, the degree of Jaws’s success came down to timing. As we illustrated in our other analysis points, timing is a pivotal component of strategy. For Jaws, that meant not getting caught before the most impact could be made: shock and awe on the 4th of July.

For business, timing could mean offputting certain Objectives or Key Results or shifting priorities up.

If you’re a software company, setting Key Results around new product features can be beneficial or costly. For example, what if existing features are buggy, inconsistent, or have tons of negative feedback? Flooding the market with a new feature isn’t going to improve success. On the flip side, if you’re crushing it on product performance and everything is together internally, a new feature could mean a killer competitive edge. This concept can be applied to any industry.

OKRs require the right balance of caution and risk, stretching without overstretching, and the always-important context of timing. The market is volatile. Incumbents are challenged all the time. We must find new ways to invest in growth opportunities and hone in on execution to thrive. Too much of anything is bad, even in a market that feels like survival of the fittest.

When introducing OKRs, businesses often wonder how do they fit in performance appraisals or bonus schemas. Every organization will have its own take and in this post, I am going to share how we are doing this at Gtmhub. No individual bonuses We are a relatively small business, so this works well for us. Namely,

If you’ve made the decision to implement OKRs in your organization, this article is for you. Maybe OKRs are new to you or perhaps you’ve tried implementing the methodology in your organization before with lackluster results. Either way, you want your team to succeed. Here are some tips to help your team adopt OKRs successfully.

ByViktoriya Marinova
June 10, 2019
Subscribe to our blogGet the latest blog posts delivered straight to your inbox