Hela and her OKR 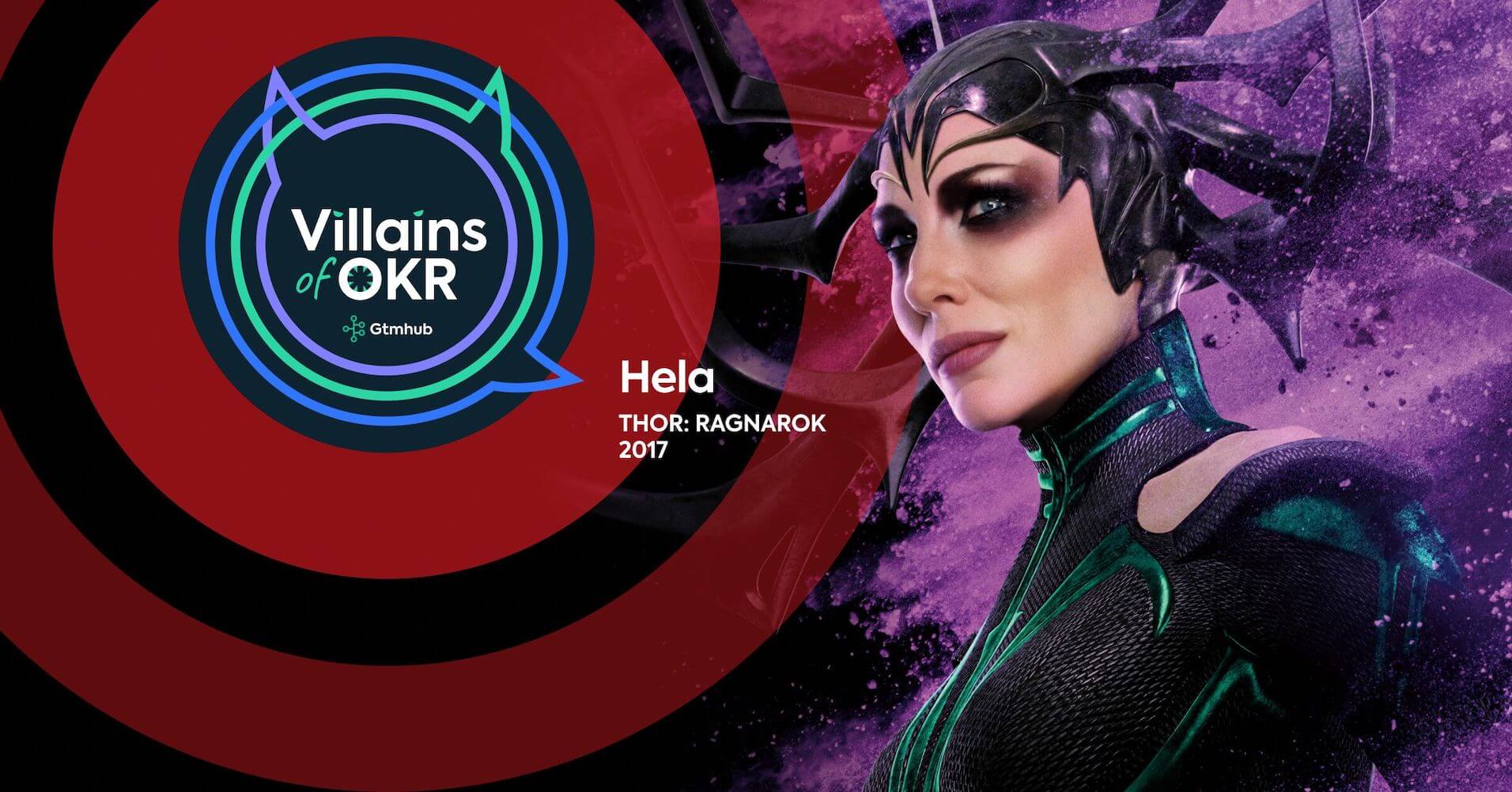 “We were once the seat of absolute power in the cosmos. Our supremacy was unchallenged. Yet, Odin stopped at Nine Realms. Our destiny is to rule over all others. And I am here to restore that power.” – Hela Odinsdottir

Complete the bloody conquest she and Odin started—to bring all of the Nine Realms into Asgard’s power.

Hela achieved 45% progress. However, there were two things that prevented her from reaching her objective: She failed to consider the greatest risk to her achieving her goal. And similar to Hans Gruber , she operated with a waterfall mentality rather than agile (little “a”).

According to Matai et al. (2012), companies fail due to unexpected losses generated by three categories of causes:

We’ll cover how this played out in our analysis.

Of all the Marvel Cinematic Universe’s villains, I really thought Hela had a chance to succeed. Hela was nearly invincible. Her superhuman abilities and powers were superior to practically any Asgardian, even Thor, at full power. The only known beings to surpass her in the universe were Odin (who died) and the fire giant Surtur.

North Star embodied across the organization

Was this North Star embodied by the Asgardians? No.

When organizational goals are not embodied across an organization, employees passively ignore them or actively obstruct progress. Either way, leaders and managers in the organization face resistance. Hela decided to handle this by eliminating those who resisted. Her style was to manage through fear. We would not recommend her leadership approach.

Did Hela have a team? Yes.

Were they empowered? No.

Hela resurrected legions of dead Asgardian soldiers, turning them into her Beserkers . They served as her military and enforced her tyrannical rule. She also resurrected her dead pet, Fenris Wolf. And manipulated one Asgardian, Skurge, to be her executioner. So basically, only the living dead followed and supported her. Empowered teams? Yeah, no.

Did we see rapid decision-making and learning cycles under Hela’s command? Sort of.

When Hela returned to Asgard, she revealed her identity, mentioned she was the sole heir to the throne and gave Asgard’s elite army a chance to be her allies. When she found resistance, she slaughtered them (save one person, Skurge). Kill opposition—partial check.

When Hela remembered that her former army was buried underneath the palace and could be resurrected, she went to the secret tomb where they were buried and used the Eternal Flame to resurrect them. Rebuild an army. Check.

When Hela realized the sword that controlled the Bifrost Bridge was missing (this kept her from conquering the Nine Realms), she hunted for it and threatened to punish the people of Asgard until it was surrendered.

What fascinates me is that she didn’t think to seek out Odin’s sword. I would have thought she’d know Odin’s sword also had the power to control the Bifrost Bridge. She had an alternative route and didn’t pursue it.

In the end, she was destroyed by Surtur, the only being in the universe who could have defeated her. I would have thought she’d think to make sure he could never be revived. Nope. She didn’t. She was risk ignorant.

Hela: Whatever game you’re playing, it won’t work. You can’t defeat me.

Thor: No, I know… but he can. (points at the newly resurrected Surtur emerging from the underground, restored to his full power)

Are people our most important asset?

What Hela failed to see, which Thor eventually understood, was that Asgard is not a place; it’s a people.

Are people our most important asset? I’d say no. People aren’t just an asset.

“Does it make any sense to say, “Our people are our most important resource” when we are the people and the company is us?” he pressed. Upon reflection, I realized the deeper truth in what he was getting at. He was right — it doesn’t make sense to say that people are our most important asset. This well-intentioned phrase was in fact carrying a buried and profoundly disrespectful message, implying conventional capital asset thinking, treating the people in the organization as an asset to be computed along with any other number in a ROI calculation. It missed the point. Badly.” – John Shook, 2008

That said, people are important to our organizations. Employees seek purpose in their work. They want feedback. And opportunities to make an impact. How can they do that? We’d suggest through OKRs. Don’t know what OKRs are? All good, we’ve got you covered. Start here .

One objective to rule them all; or how to kill it with OKRs

At the beginning of each quarter, the very first OKR I define for myself is a meta-objective: Kill it with OKRs. I’ve shared this practice with numerous people, and many think that this is some dogfooding exercise – us being the OKR Platform vendor. But, no – it’s not that. As a CEO, I think that

On rituals and rules

I was raised Catholic. Back in the day, when we were all young, a new priest came to my town. It was his first post, and as it usually goes when someone does something for the first time, he decided to do things differently. Instead of an old lady playing the organ, he formed a