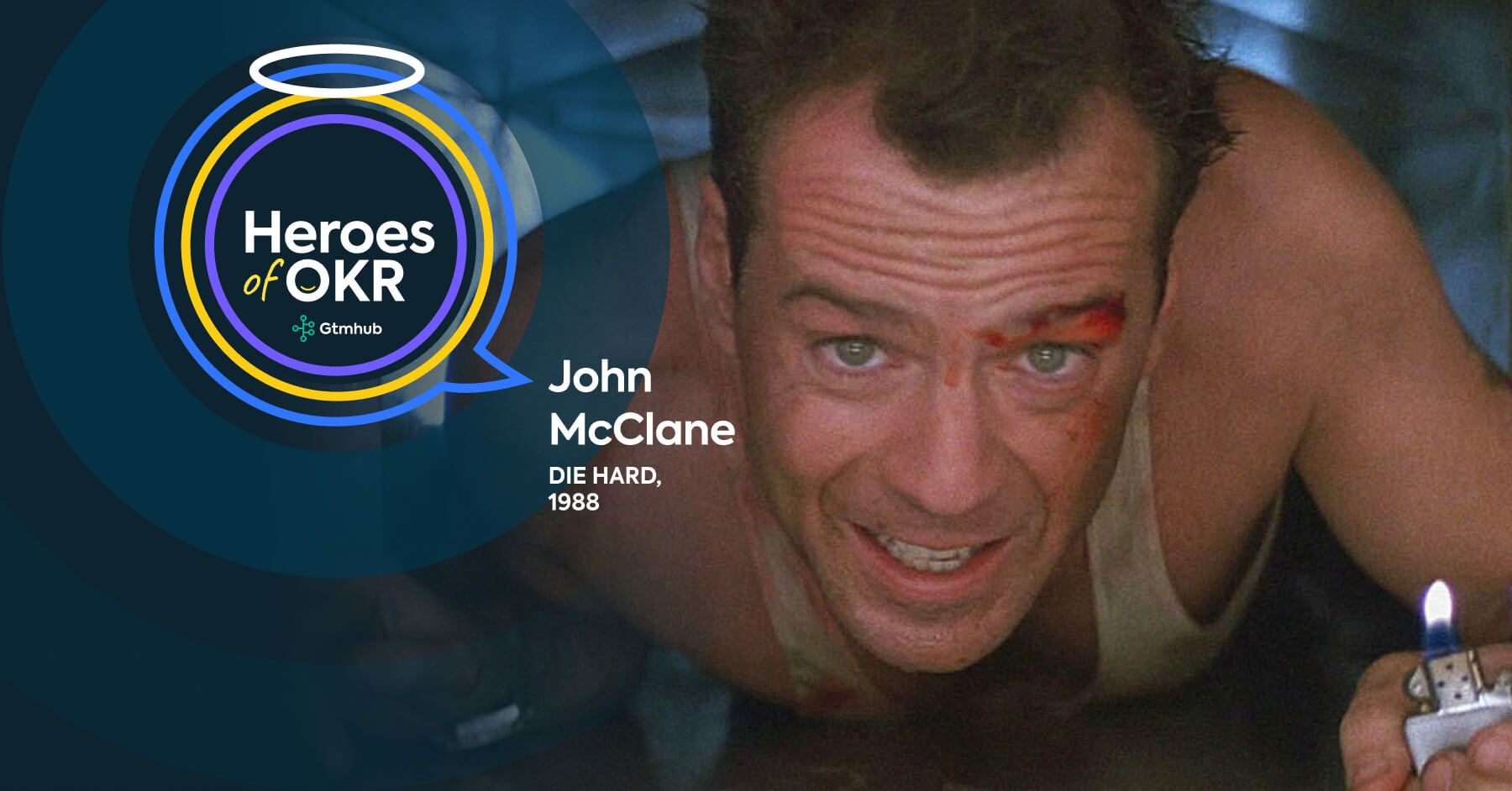 Last year, we launched our Villains of OKR series. And now, like so many flawed protagonists, we present an unlikely triumph: Heroes of OKR.

In this series, we analyze the heroes of OKR, learning from the mistakes and successes of iconic fictional heroes and looking at their strategy execution through an OKRs lens.

Personality: Wisecracking, vigilante smartass who’s got a problem with authority

Get his life together and reconcile with his just-as-stubborn wife, Holly, at the Christmas party.

In our Villians of OKRs series about Hans Gruber, we discuss how lack of agility became his downfall. It’s the opposite for John in Heroes of OKR.

John’s ability to adapt to every change leads to epic solutions. Two bullets left? Hide the gun in your back. Need time to grab it? No problem, just distract Hans with awkward, maniacal laughter.

Hans operated with a waterfall mentality, commanding and controlling rather than uniting. Again, it’s the opposite for John. John’s connection and collaboration with Al catalyze the venture’s success, even resulting in Karl’s (Gruber’s enforcer) death at the end.

KR1: Get 100% hostages out of Nakatomi Plaza alive

This KR includes John getting himself and Holly out alive, too.

We know that at least 2 hostages die. Mr. Takagi is killed right away, raising the stakes of the whole movie. Then, Ellis waltzes into the line of fire.

Let’s be honest, Ellis digs his own grave.

We’ll give John 90% here because, despite those deaths, he still made all the right moves, and I don’t feel like doing the math.

KR2:  Recruit as much additional help to the scene as possible

With limited resources to rally outside help, John takes a hypergrowth approach to getting the help he needs — dropping a dead body onto Al’s cop car.

This risk ends up paying off. It’s a glorious moment for alignment and maintaining an authentic culture. What action could be truer to John’s character?

But this also brings the FBI in, muddling the situation and allowing Hans to gain vault access. More cops get killed. Because of these negative consequences, we’ll give John 80%.

In business, sometimes your risks pay off and sometimes they don’t. But every action has intended and unintended consequences. This is the nature of our limited scope of perspective as leaders or team members.

The lesson is in having a supportive team — as McClane knows he has with Al (with the right push) — to enable risk-taking, good or bad.

KR3: Find the words to say what he’s been feeling

This is arguably John’s most important KR. I’m not sure the rest could have been accomplished without it.

To become the best version of himself, John needs the perspective he gains from a) talking to Al and b) facing death, to see that it’s okay to feel his feelings and admit his mistakes. #EmotionalMcClane

He tells Al to convey the message that he’s sorry, mentioning that he’s never really said sorry to Holly before. This highlights the underlying problem in their relationship.

John takes accountability for his lack of support. He becomes the best version of himself at that moment and gains the clarity he needs to rescue Holly from Hans.

This also brings out the best version of Al, who can forgive himself and accomplish what needs to be done. That’s teamwork.

At one point, John has shards of glass stuck in his feet from a shootout with Gruber’s team. He has to pull the glass out and treat his wounds. While doing this, he discovers why Al no longer serves the streets as a cop: he made a mistake and shot a kid.

Die Hard isn’t just a movie about Christmas terrorists. It’s about dropping your pride enough to admit when you’re wrong. It’s about saying sorry. And it’s about realizing your worth goes deeper than even your worst mistakes.

While Die Hard isn’t a direct parallel to the speed of decision making in business, a powerful lesson is demonstrated by McClane. Not every choice is obviously good or bad in business, whether you’re a startup, small business, or enterprise.

The strategic advantage comes with incorporating rapid decision making informed by data and your teams. John doesn’t make the best decision every time, but he makes the best decision at the time with the information available.

As Al learns from John, you can’t judge yourself (or others) because you make mistakes — dwelling on the past takes away from your ability to create a better future. OKRs keep us focused on our overall Objective. When we fail tasks or they don’t have the impact we planned, we can always move to the next idea for driving impact.

John becomes the best version of himself when he uses his skills and personality to protect others and put them first, including his wife. By doing this, he comes full circle, achieving his original mission to reconcile with Holly and his kids. Not the most angelic in the Heroes of OKR, but respectable nonetheless.

In the end, John McClane wins the day over Hans Gruber... and all without wearing shoes. 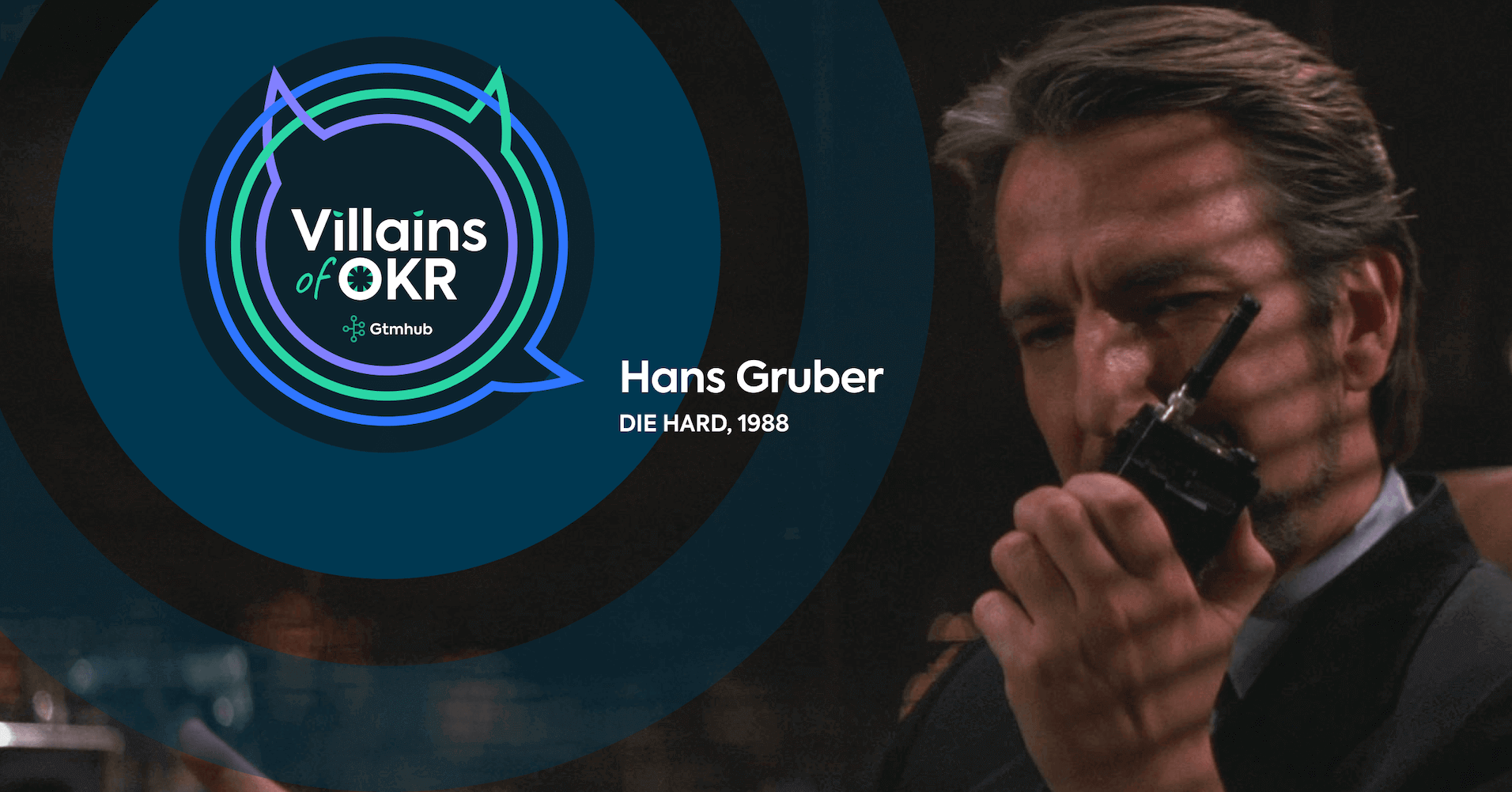 Hans Gruber in Die Hard: Stealing the Day with OKRs

Gruber’s plan seemed like a stroke of genius. Dying at John McClane’s hands (Yippee-ki-yay Mother…[NSFW]) was not a potential outcome Hans accounted for. This objective needed to be a committed effort with an adaptive strategy and flawless execution. 60-70% achievement wouldn’t cut it.