Crush the 5 Team Dysfunctions with OKRs 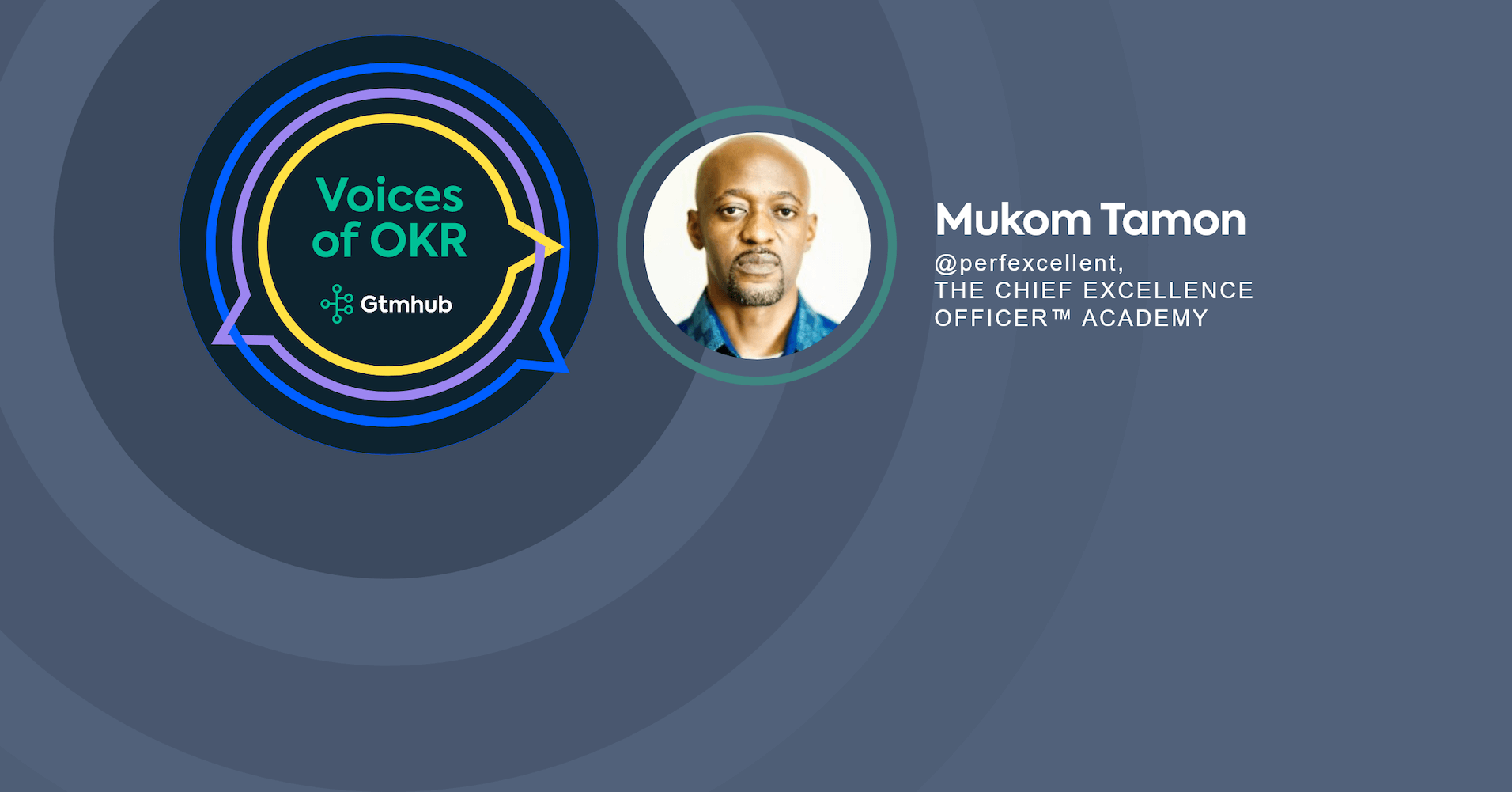 Mukom Akong Tamon is the Head of Capacity Development & Professional Services at the African Network Information Center ( AFRINIC ) where he has developed Africa’s best and most valuable IPv6 training program, having trained more than 900 network engineers in over 40 countries. He also created The Chief Excellence Officer™️ Academy to help managers DCITE (Design & Create the Infrastructure of Team Excellence) using OKRs, 4DX, LeanSixSigma & ultra-cool apps. In this Voices of OKR piece Mukom reveals how OKRs drive team excellence and counter the top 5 team dysfunctions.

KR#1 : Everyone improves their weakest Trust Behavior by 25%

This is an actual OKR that my team had in 2016!  And yes, KR #4 is pretty mediocre! But you might be wondering?

My #1 value is excellence.  I hate mediocrity in all its forms, whether it shows up as shoddy work, a lack of professionalism, not keeping one’s commitments or plain old laziness! I loathe it all.

One of the agenda items during our beginning of year retreat was to evaluate, diagnose and strengthen our team culture. While there’s a school of thought that believes culture cannot be changed, I know it can be … Because I’ve done it more than once.

As a team, we were (and still are) masters of process. We’re masters of using web tools to operationalise processes, and we pioneered OKRs in our company. But we also know that it’s the “stuff” around work, feelings and trust and relationships, that grease the work and amplify the potency of our efforts.

We prided ourselves on being a results-oriented, non-nonsense, high-performance team (no bullshit), but by our own assessment, we were doing that at the expense of basic social niceties and in some cases, assholes. As the team lead, I took this cultural failure as my responsibility and sought to address it head-on.

Why trust and relationships?

As fate would have it, we had recently undergone a workshop on  Smart Trust by FranklinCovey; I immediately fell in love with the following aspects of the model:

The relationship part? — let’s just say I am a disciple of the school of “my job as a manager is to get results through other people” – and role power is the least effective way to get sustained excellence.

Fast forward to 2019, Patrick Lencioni’s “ The 5 Dysfunctions of a Team ” had been sitting on my bookshelf for over six months and I thought I’d finally open it — yes, I happen to believe that books have the answers to most problems. I did and time stopped for 2 days – I don’t remember anything else but how real and hard the lessons of the book struck a chord.

In the model, I instantly saw how critical trust was to building the culture of excellence of my dreams – the very opposite of the Mediocristan of dysfunction.

– It all starts with an absence of trust, which then leads to …

– Fear of conflict, without which there’s a general

– Lack of commitment to team goals which drives

– Avoidance of accountability, leading to an

Persistent inattention to results is the superhighway to Mediocristan.

There you have it, a clear path from the breakdown of trust to underperformance.

I often say the reason to be grateful for darkness is that it makes you understand and appreciate the light and vice versa. Now that I had, thanks to Lencioni, a vivid image of how the thing I hate most – mediocrity – is, then I could better articulate what the thing I love looks like.

At the opposite end and across the tracks from mediocristan is the domain of 1% Excellence Boulevard. That’s the land of consistent, eminent and seemingly effortless excellence,  and high engagement. The price of admission? Victory against dysfunction.

So I had a dream (1% Excellence Boulevard), I knew what failure looked like (Mediocristan), I had a blueprint for solving the keystone problem (the smart trust model).  All that was required was for me to put it into practice.

So you’re a manager (or leader if you prefer), then you know that the relationship between you, your directs and between them is really what determines whether you function as a team or a group of people. What do you do to strengthen those relationships?

If you ask someone in HR or a consulting firm, they’d likely prescribe something called Team Building activity – often outside of the office, facilitated by a team-building consultant and involves games, drinks, food and sometimes pointless things like trust falls.

1. They usually involve the whole company, not a well defined functional or project team. Unpopular opinion: the entire company is not a team, and no, it’s highly unlikely that it’s a family. Your company is a system of interdependent teams which function more like a machine or orchestra, each unit with a clear role which if it executes with excellence results in beautifully harmonic music of high performance.

2. Team building cannot happen out of the context of the Objectives and activities of the team. That’s often missing in “team-building” activities.

3. 99% of team building is trust-building. Trust isn’t built at a 1-day off-site, it’s the result of a series of on-going interactions between individuals that strengthens mutual perceptions of competence and character.

In a nutshell, trust an inside job that never ends.  The good news is that the trust model makes it dead easy by giving an actionable blueprint (specific, measurable behaviors rather than pie in the sky principles and theory.

Here’s where OKRs meet trust: OKRs help us directly practice 6 of these 13 behaviors

– Behavior #3 : Create Transparency: tell the truth in a way that people can verify for themselves. That’s exactly how Key Results establish the desired effect that individual or team effort (causes) should drive.

– Behavior #6 : Deliver Results: establish a track record of getting the right things done.  When we deliver on Key Results, we’re literally Delivering Results! (Pun intended). Even when you fail to achieve a Key Result, when you can articulate and integrate the lessons learnt from that failure into the way you work, you build credibility.

– Behavior #8 : Confront Reality: take the tough issues head-on. OKRs help us clearly define what a desired future reality looks like, so we can realign our behavior (activity) to it. Great OKRs leave no room for reinterpretation to suit egos or political agenda. You either accomplished the Objective, as measured by its Key Results or you didn’t – and more importantly if you put in honest effort, you’d have a good reason for why you failed so that the next attempt could stand a better chance.

– Behavior #9 : Clarify Expectations: discuss and validate expectations, renegotiating them if needed and possible. OKRs are our overarching expectations for a quarter or year. And when we grade them each quarter, we get the opportunity to renegotiate them where possible based upon real data of the past period.

In every relationship, the single biggest determinant of whether it thrives, is tolerable or fizzles is how conflict is handled.  You can tell a lot about the quality of a team, and its leadership by how they do conflict:

On one hand, there might be zero conflict. Everyone is always nice, no one ever gets challenged on anything  –  those are left for private bilateral conversations. On the other extreme, there’s constant conflict, people get defensive, argue to make their points and defend their position, call in allies and take the conflict beyond that meeting into the rest of the day. Conflict becomes personal and nasty.

And then there’s nirvana,  teams that embrace conflict and grow from it both as a team and individually.

By establishing a standard for expected results along with a culture of prioritizing learning over blame or punishment, teams can have more productive conflict since it’s the collective Objective judging each person (against clearly defined Key Results) and not some individual doing  so (probably using subjective standards), which leads to interpersonal conflict.

And yes, in practice, where trust is low, OKRs can be wielded as a weapon which is why everything rests on continuously filling the mutual Trust Funds.

When OKRs are co-created by teams, rather than dictated by the boss, it generates buy-in and commitment by everyone. Why? Because they own them — they’ll put in a lot more for “what we agreed to do” than “what s/he told us to do”.

The laziest most inept people in any company thrive in the lack of specificity of Objectives. When Objectives are not clear, then anything can be reported as progress.

OKRs (along with KPIs) enable us to evaluate the impact of every single activity. These are the keystones of accountability. When you set out to measure what matters, you’ll tend to do things that matter.

The biggest benefit of OKRs to crushing dysfunction is right here in the name — Key Results.  Not just results, key ones, ones that matter for progress and engagement.

Every choice you make is a vote for the kind of person or team or organisation you wish to become. If you don’t explicitly choose to seek permanent residence on 1% Excellence Boulevard, you’ve implicitly chosen to drift to Mediocristan.

If you’re a manager who wants to build an infrastructure for team excellence, the kind that puts you, your team or organisation on the fast track to 1% Excellence Boulevard, take my Free OKR Crash Course at https://www.perfexcellence.com/excellence-through-okrs/ and learn:

My biggest piece of advice for anyone about to embark on an OKR journey would be to answer this question: why OKRs, why now? Just like with any other management tool, it is important to clearly articulate the rationale behind your choice for OKRs.

OKRs help to minimize the overhead in planning for the company and focus more on what really matters.

Why every early-stage company should implement OKRs immediately

The power of clarification OKRs provide is especially beneficial for startups, where the big picture, and definitions of real progress, can easily get lost in the chaos of the day-to-day.